I was so very excited to let you all know how we were planning on the best P-Day ever today, but we just BARELY received the call that everything got cancelled. I will explain:

Near the end of last week, our vehicle coordinator called asking how many miles were on our car, and we told him, and he told us he has a brand new 2016 Dark Blue Ford Fusion waiting for us in Lansing and to come pick it up on Monday! So we had all of these awesome plans for things we were going to stop and take pictures at on 3 hour trip down there. We were even going to have lunch with some other Elders, and dinner with a family in Saginaw on the way back. But something happened, and we got called and told that the car switch is cancelled for right now and they’ll get back to us. :/

Anyway! There were some great things that happened this week. On Wednesday, we were out knocking on doors with Collin (who’s heading to the St. George Mission) and the snow and wind were getting progressively worse until we received a call from Elder Johnson with a message from President Jacobsen saying all missionaries are to return to their apartments. Indeed it was a dangerous trip back because it had become a blizzard, but we made it safely.

SO, Thursday we decided to get out and find by shoveling people’s driveways! Some people were very grateful and even offered us money which we did not accept. No one was particularly interested in learning from us but strong seeds were planted through service. 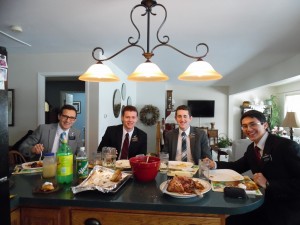 Had dinner with former investigators from a year ago on Saturday. They LOVE missionaries, and gave us a bunch of food to take home. They want us to come back for dinner again soon and teach a lesson. 🙂

Last thing – this was miraculous. During church yesterday, a man named called the church asking if it would be able to help him pay for his wife’s medication for seizures. The member who talked to him on the phone willingly met him at Rite-Aid and paid for the medication, but then began to speak to the man about his spiritual needs, too, and talked about the missionaries. Then, the member called us and asked us to meet them there, so we did, and Brother Byard invited him to learn from us and gave him a Book of Mormon. So we scheduled with Ryan for Thursday; however, after we got home and had lunch, Ryan called us and asked us to come immediately, and so we did, and we prayed, he talked to us, he cried, he asked why God would allow their financial problems to come and to affect his children, and we taught him why and about the Restoration of the Gospel. He says he will read the Book of Mormon and be at church with his daughter on Sunday! I truly hope and pray things will continue to go well for these people.

This turned into a pretty long email, but just know that God does work miracles, whether we notice them or not, and whether we choose to believe it is merely coincidence. Know that I no longer believe in coincidence. I see the blessings he gives me too many times every single day to believe otherwise.

Love you all, and hope you have a great week. 🙂

Let’s see if we can keep this somewhat short and simple.
Last Wednesday we had interviews with our mission president, which went very well. President Jacobsen offers so much inspired wisdom and counsel particular to our individual areas and circumstances. He gave me a lot of hope and motivation to strive to work even harder. 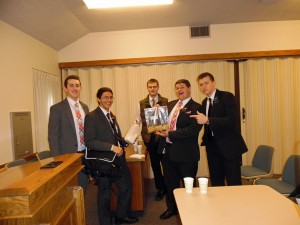 Collin Schroeder, an awesome young member of the Oscoda Branch, is heading out to the Utah, St. George mission in March! He joins us often in the work, whether it be knocking on doors or teaching lessons, so that he can prepare, and so that we have an extra mind and spirit with us.

Last Thursday we had the opportunity to teach a wonderful, brand new family in East Tawas. It’s a mother and her two kids, who are about 15 and 12 or so. The Spirit was strong in the lesson and we hope and pray that they will continue to learn more about the restored Gospel and the Book of Mormon and find out for themselves whether it is all true. We will be meeting with them again today with a couple of members. Is this the family we have been looking for? 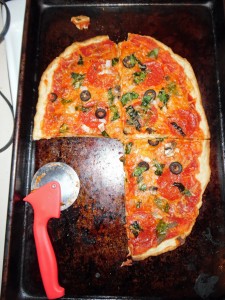 Lastly, we were blessed with the chance to do a church tour with another investigator, Nikki, along with two other amazing members of the branch with their kids. Nikki very much enjoyed it and it was quite spiritual, especially with Sister Scherbel having the opportunity to talk to Nikki about the chapel and the sacrament and what it means to her. Unfortunately, Nikki wasn’t there at church yesterday, but we will get her there soon. 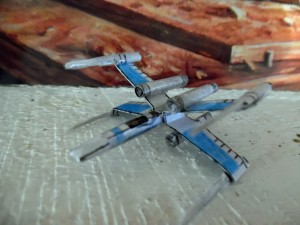 As for right now I believe that is all! We don’t have much planned for P-day today or anything, as we are quickly running out of miles to use for this month. I love you all, I hope you have an amazing week, and remember the love that God has for you as an individual. I mean it, as an individual, He is aware of you and knows you and wants what’s best for you. So just let Him in, you can trust Him. 🙂

Presidents Day got in the way so here I am at the library emailing on a Tuesday.

Last week was pretty awesome. Went on a tradeoff with the district leader, Elder Johnson, who is super awesome. I’m grateful for this district. There’s only four of us, but this group definitely knows how to have fun in the right way. So last P-Day we played a lot of basketball in the Oscoda Branch building, and then chilled for a while at the house. Then Elders Hudson and Blazzard left and I was with Elder Johnson until Wednesday. But oh no, Fat Tuesday had to go and ruin all of our stomachs. Elder Johnson and I had dinner twice, and apparently the other Elders each ate 8 pazckis! (Don’t know how to type that with an english keyboard.) Then it really ended up becoming Fat Week instead of just Fat Tuesday. We are now facing repercussions. 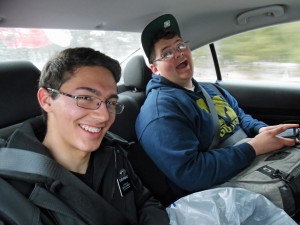 We’re doing the best we can and people keep cancelling on us and lessons keep falling through. We had the chance to teach a new family last week, and taught the whole restoration, and they thought it was awesome, but don’t want to investigate. They say they are fine where they’re at. This area is pretty difficult, but we are surviving the 0 degree weather and putting in our 15 hours of doorknocking. We need a miracle to keep this branch alive. Either that or for spring to bring floods of people back to this place. 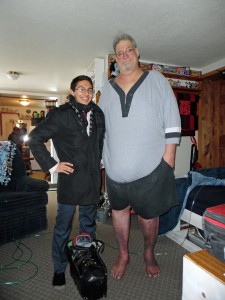 1 After Basketball
2 tradeoff w/ Elder Johnson, visited a member who is 6’10
3 etc 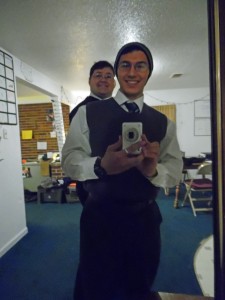 Love you all, have a great week.

Before I talk about anything else I just want to bear testimony that everything happens for a reason. When something falls through there is a reason for it. There is no coincidence. Take that into account for a week and see how it makes your actions and reactions different.

Another week in the winter wonderlands of Oscoda, Michigan. I don’t at all remember what I wrote last week and I’m running out of time so I am probably going to repeat myself but oh well.

We had four majorly important lessons set up throughout last week with our investigators, and had plans for members to be there at those lessons as well: the ideal situation. All four of them ended up falling through. Additionally, a lot of the other people we attempted to visit were not home or were busy, and I am feeling pretty sick. But friends and family I can promise you that everything happens for a reason, and all of the trials and experiences of this life and of this month and of this week and of this moment are going to be for our benefit. Let it work for your benefit. 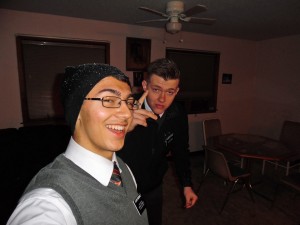 Saturday we were knocking in the old air force base. We are not solicitors. We are not soliciting funds. We have a right to knock on peoples doors and talk to them; however, time after time we ended up with people angry and contentious or yelling at us or slamming their doors on Saturday. Oh and threatening to call HOA or the cops. But it was all worth it because we did find one person who is interested in learning, and whose father has cancer. Hope we are able to come and teach them soon.

On a bright note, last Monday, as a district we all went to the Tanger Outlets near West Branch and I ended up with some nice Vanheusen getup. It’s the little things in life, right? 😉
Oh and I also schooled the whole district at Monopoly Millionaire, which gave me a pretty big sense of accomplishment.

Keep pushing through, there is light at the end of the tunnel, there is hope shining brightly before us, and deliverance is nigh. If we hold on to the principles of the Gospel nothing can ever go permanently wrong. The Savior is our foundation for peace and joy in this life and in the life to come, and He is Jesus Christ. Of these things I testify in the name of Him, our Lord and Savior, Jesus Christ, amen.

Hello friends, family, and all others concerned,

I just wanted to let you all know that things are going great. Oscoda, Michigan is pretty far north, and seriously right on the coast of Lake Huron, and is therefore a resort town, in and of itself. It’s February. The coldest month. Like 40 to 60% of these home are vacant…. The branch is also quite small during the winter months because many members of the branch only come to live here during the summer when it’s supposedly bright, beautiful, and warm. Yesterday was my first time here at this building, and suddenly, before the first talk, the 1st counselor who was conducting said that the new missionary was going to come up and introduce himself and bear his testimony! So, I did! There were a bunch of visitors because of a baby blessing. 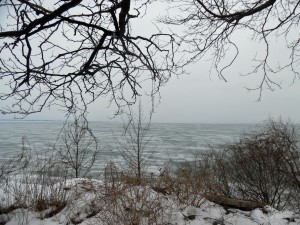 We do have a few wonderful people to teach, but because our area is so spread out and those people are so spread out, our opportunities to see them are limited to what seems to be only once a week. Other than that we get to do a lot of finding. Elder Hudson and I get along well! We share a childhood love of Pokemon. Last night he schooled me at Monopoly Millionaire. It’s honestly been a pretty odd and hard transition, not knowing anyone, not having much direction from others, including my companion, but I’m just doing my best to rely on the Lord. 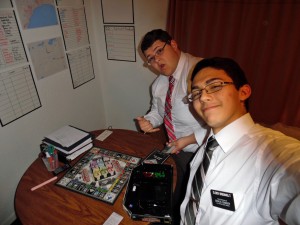 We’re going to try some very new things in this area. There hasn’t been a baptism here for three years at the least. So we are going to change that pattern.

God be with you all. Never forget that Christ’s Atonement was not only for our sins, but for our trials, weaknesses, and infirmities, and He can and will take away your pain if you will let him. All it takes is a simple, humble prayer.

I love you all and hope that you have a wonderful week.